Business No Longer Boomin? – The Downfall of Antonio Brown 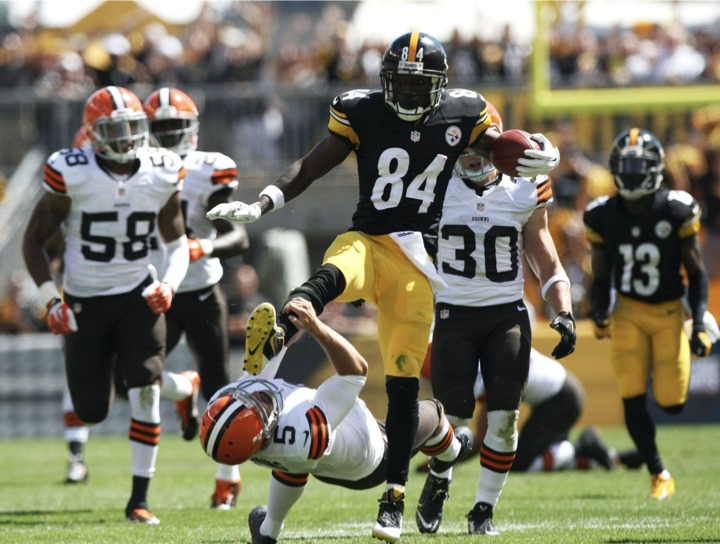 In 2010, with the 195th pick of the NFL draft, the Pittsburgh Steelers selected Antonio Brown, a wide receiver from Central Michigan University. Although he went into his rookie season in the 5th spot on the depth chart notably behind Steelers-legend Hines Ward, it was clear that he desired a higher spot. On the first play of his first-ever NFL game, Brown scored a touchdown on a kickoff return. While the rest of his performance throughout the season was nothing out of the ordinary, the Pittsburgh Steelers went to the Super Bowl that year to compete against the Green Bay Packers. Unfortunately, they lost, but making it that far was a major achievement in itself.

Over his next few seasons with the Steelers, Brown continued to improve, being selected as a Pro-Bowler in only his second year on the team. While Brown improved on the field, eventually becoming a starter in 2013, he also gained attention off of the field. Fellow players at the time reportedly claimed that Brown had a big ego and called himself “the franchise.” The media also focused attention on Brown due to his excessive celebration when making large plays and an accident in which he kicked a player of the opposing team in the facemask. He suffered a season-ending concussion in 2015, but this did not stop his rise to the top.

In 2018, Brown was given the honor of appearing on the cover of Madden 19. Brown didn’t know it at the time, but after appearing on the cover, the Madden Curse was out to get him. Later in the year, he was sued for throwing large pieces of furniture out of the window, nearly hitting a child, as well as for reckless driving. After getting into an argument with Steelers Quarterback Ben Roethlisberger, Brown requested a trade from the team that he had played on for eight years. Brown ultimately was traded to the Oakland Raiders, but after disagreements regarding his helmets and many missed practices, he requested to be released before playing even a single game with the team.

On the same day he was released from the Raiders, Antonio Brown signed a one-year deal with the New England Patriots. At the time, he also had a major sexual assault scandal going on off the field. After more accusations came out, Brown was cut the next week. Over the next few months, Brown changed his mind multiple times on if he would come back to play again. It is reported that during his time in New England, Brown fostered a relationship with the legendary Tom Brady, a connection that would turn out to be useful to Brown down the road.

In 2020, Brown signed with the Tampa Bay Buccaneers and it was reported that he was apparently living with Brady during much of the season in his Florida home. During his first season with the Buccaneers, Brown went to the Super Bowl and unlike his time with the 2010 Steelers, the team won.

While Brown’s erratic behavior throughout his career has earned him a lot of attention, nothing can compare to everything that has happened to him this season. At the beginning of the season, Brown got Covid-19 and it was later found that the vaccination card that he presented to NFL health officials was indeed fake. While Brown has yet to be legally punished for this offense, he did receive a three-game suspension.

Antonio’s most recent offense occurred during the Buccaneer’s Week 17 game against the New York Jets. During the third quarter, Brown ripped off his jersey and padding, ran across the field shouting, and did not return. In the next few hours, Head Coach Bruce Arians stated that Brown was no longer on the team. The media had a field day with this story, making endless jokes. Many assumed Brown was angry that he wasn’t getting enough playing time since his salary is based on his performance throughout the season. To add to the comedic situation, the next day Brown released a rap song entitled “Pit Not the Palace,” causing many to think that his actions were just a publicity stunt to gain interest in his music. Although it seemed funny on the surface, Brown later came out with a more serious side to the story. He claimed that he had an ankle injury that both Arians and the team doctors ignored. During the game, Arians was pushing Brown to play, but Brown refused since he was in pain. If this story is true, it’s hard not to feel a little sympathy for Brown, since his coaches and doctors are supposed to be who he can trust the most. 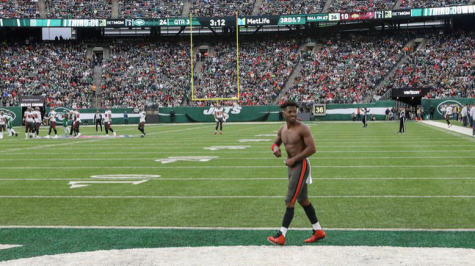 Antonio Brown’s career has been eventful, to say the least. While his performance on the field has been impressive, his actions outside have tainted his reputation to a point of no return. It’s difficult to say what the future holds for Brown, but at least if his NFL career is over, he always has his rap career to fall back on.