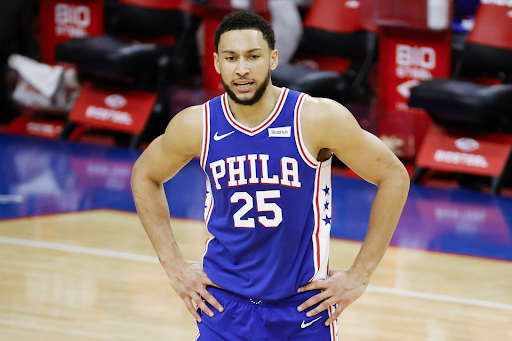 As we approach 2022, the Ben Simmons situation still lingers. It feels like this has been going on forever. Let’s take a look back and see how we reached where we are at today.

Where things really started to take a turn was after the 76ers game seven loss to the Hawks in the playoffs. During the postgame press conference teammate Joel Embiid and head coach Doc Rivers were critical of Simmons during the series loss to the Hawks. Whether it be Embiid saying that Ben Simmons passing up a wide-open layup was a turning point in the game seven loss or Rivers questioning Simmons’ ability to be a championship level point guard, Simmons did not enjoy these comments made about his play.

Shortly after these comments were made, Simmons’ agent, Rich Paul, met with the 76ers to discuss Simmons’ future with the team and whether a trade would be the best idea. No formal trade request was made and the focus was to keep Simmons as the main piece.

Simmons, supposed to represent Australia in the Olympics, withdrew himself from the team to focus on his individual skills to improve his game. The time between the comments made about Simmons and him withdrawing from the Olympics was only one week.

As the summer progressed, nothing much was made of the situation. The 76ers made it clear the asking price for Simmons was high. As September approached, the team’s focus remained as it was at the start: Simmons being on the team.

Things started to pick up with Simmons officially requesting a trade and saying that he was not going to attend training camp. Simmons also missed media day, where his teammate Joel Embiid criticized Simmons. The main point of his comment was that he felt that the whole situation was “disappointing [and] borderline kind of disrespectful.” He added that he felt for the people on the team fighting for a spot in the league, while Simmons was a contributor on a successful team.

The team then did not pay Simmons the quarter of his contract for the upcoming season that was due on the first of October. This led to Simmons missing the entire preseason and being fined for every game missed.

Then, on a seemingly positive note, Simmons returned to the city of Philadelphia, passing all of his tests and physicals. This potential positive not quickly turned into a disaster. During a practice, Simmons was allegedly not engaged and thrown out, earning him a one-game suspension.

As the regular season kicked off, Simmons continued getting fined for not playing in games. What evidently stopped these fines was Simmons saying he was not mentally ready to play. With this, the team offered Simmons whatever he needed to help his mental health. Simmons refused, and the fines began again.

One report that raised some eyebrows was that Ben Simmons might be forced to rejoin the team due to going broke. It was reported by Howard Eskin, a radio host from Philadelphia, that Simmons lives an expensive lifestyle which includes buying a new car monthly. None of this is confirmed, but as we sit here today, Simmons has not rejoined the team.

What is important in the situation is who is at fault. It can be looked at in two different ways. The first one is his development as a player and the second is the situation publicly. The first way is pretty clear. Simmons deserves most of the fault for his development as a player, but the team also is guilty. The team did everything in their power to accommodate Ben Simmons on the court and he never developed a jump shot to elevate his play. All of Simmons’ on-the-court problems stem on the offensive side of the ball, as he is an elite defender, being named to the All NBA Defensive Team twice. Simmons has not improved his offensive game since he came into the league. This could possibly stem from two different things, the first from being recognized by the league. Simmons won Rookie of the Year for the 2017-2018 season. He is also a three-time All-Star. Simmons being recognized could very well have kept him from feeling the need to improve his game. The second thing being the 76ers gave Simmons a max contract extension in 2019. Simmons could have taken getting the contract extension as reassurance that he did not need to vigilantly work on his game as he is getting paid like the players at the top of the league.

Simmons has done everything in his power not to get not paid. A cynic would say that Simmons is claiming that he is not mentally strong enough to play to avoid being docked pay as well as being fined. Mental health, when aligned with professional athletes, is growing more and more prevalent and Simmons could be diminishing the movement of mental health if this is the case, but the fact of the matter is that we don’t know if this is true and we never will.

What’s next for Simmons is the biggest question. Simmons has mentioned that he would like to play in the state of California. The likeliest of the three feels like the Sacramento Kings in a deal that would include guard De’Aaron Fox. Two other teams that seem to have what the 76ers would be looking for are the Indiana Pacers and the Portland Trail Blazers, but unfortunately for Simmons, these two teams are in small markets. A deal with the Pacers would seem to include guard Malcolm Brogdon. The most intriguing trade would be to the Trail Blazers. The 76ers originally hoped to get back Damian Lillard but Portland made it very clear that he is off the table. The main piece in return for Simmons would most certainly be CJ McCollum. What makes the move to Portland the most intriguing is that Lillard mentioned being interested in playing with Ben Simmons, which no one up to this point has said. These potential suitors for Simmons seem like they are not giving up enough for him, but it has to be remembered that Simmons’ contract is not friendly and that Simmons has yet to prove that he can and will improve. One thing seems certain and that is that Ben Simmons will not play another game for the Philadelphia 76ers.