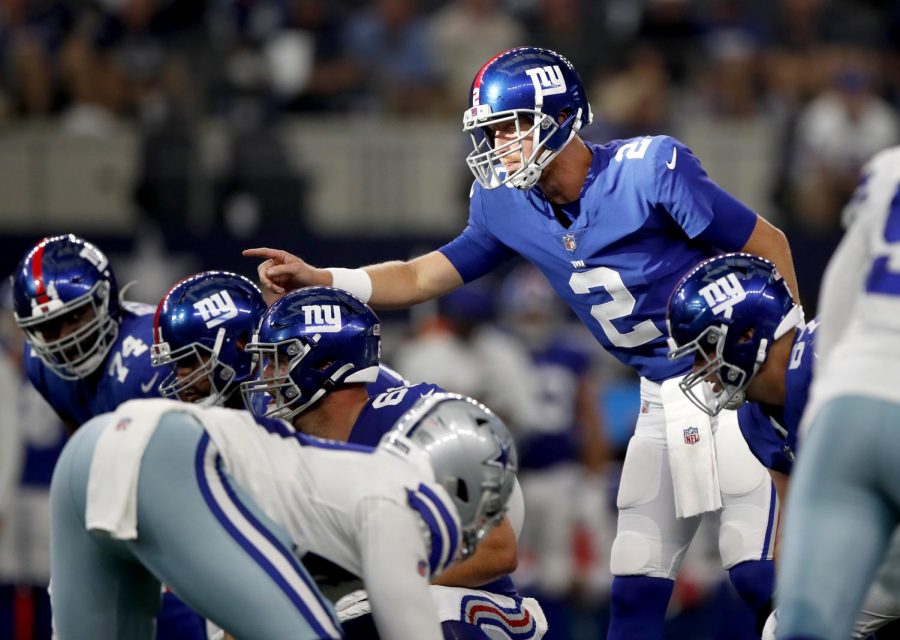 The New York Giants suffered a 44-20 loss to the first-place Dallas Cowboys in week five, but the score doesn’t go nearly as far to tell the whole story of the game. The Giants came into Dallas already battered on the offensive side of the ball, notably wide receivers Sterling Shepard and Darius Slayton and startling left tackle Andrew Thomas, who was active during practice,but did not play with a foot injury. Very early on, running back Saquon Barkley landed on the foot of a Cowboy defender as a pass in his direction sailed over his head. Barkley limped off to the sidelines in serious pain. A look at Barkley’s ankle was shown on the broadcast, and it was very swollen. Barkley was then carted off the field and quickly ruled out. You can’t help but feel bad for Barkley, who had just practiced fully for the first time this season coming off his ACL injury. Things don’t look good for Barkley. As of now, there is no word of the results of the MRI, but Barkley was seen leaving the building with a boot on and crutches. Things were looking in the right direction for Barkley coming into week five, so it is devastating to see him go down once again.

Adding to the pain of losing Barkley, quarterback Daniel Jones had a scary few moments late in the first half. Jones carried the ball near the goal line and lowered his helmet, causing helmet-to-helmet contact with the Cowboys defender just short of the goal line. Jones got up slowly and was clearly dazed, struggling to walk. He was helped by trainers, and carted back to the locker room and was soon ruled out with a concussion.

Wide receiver Kenny Golladay was also injured during the game, as he was ruled out with a knee injury. Postgame, Golladay said that he hyperextended his knee in the first quarter. He continued to play on it but said it worsened as the game continued. The Golladay injury makes three notable Giants weapons injured in the same game. The Giants at one point in the game were down seven out of eleven of their week one starters on the offensive side of the ball. The Giants also lost rookie starter cornerback Rodarius Williams to a knee injury. This injury was not beneficial to a Giants secondary who has struggled so far this season.

Another big story of this game was Giants rookie wide receiver Kadarius Toney. Toney came off his best game of the year in the game the week before against the Saints in the Giants’ lone win. The rookie out of the University of Florida had a monster game of ten catches for one hundred eighty-nine yards (the most receiving yards in a game for a rookie so far this season) and one carry for seven yards. It seemed like nothing could go wrong for Toney, but late in the fourth quarter, after getting shoved by a Cowboy defender, Toney then threw a punch, getting himself ejected. While walking off the field, he was greeted by frustrated  head coach Joe Judge. Even though Toney was ejected, it was still a very promising day from the Giants’ first-round pick. There was something to keep an eye on: after making a catch on the sideline in the second half Toney was slow to get up and was in pain on the sideline, but went back into the game. Postgame, Toney was shuttled on a cart to presumably get an x-ray on his lower half.

Mike Glennon, the backup quarterback, replaced Daniel Jones late in the second quarter and was fine. He threw for one hundred ninety-six yards, a touchdown, and two interceptions. The Giants kept it close but the Cowboys eventually put the game out of reach. Nate Solder, getting the start at left tackle for banged-up Andrew Thomas, was rag-dolled by the Cowboys’ edge rushers. Coach Judge mentioned postgame that Thomas was only going to play in case of an emergency. Solder’s poor play was not an emergency, but Thomas was missed. Another sour performance for the Giants was cornerback James Bradberry, as he was burnt for a touchdown. He was called for defensive pass interference and dropped an interception that led to a Cowboys touchdown.

Now, sitting at one win and four losses, the Giants’ schedule is only more difficult from here. They play the Rams, Chiefs, and Buccaneers all in the next five weeks, with two of these games in primetime. The Giants fans need to hold their breath as Barkley, Golladay, Toney, and Jones are further evaluated to determine the severity of their injuries.