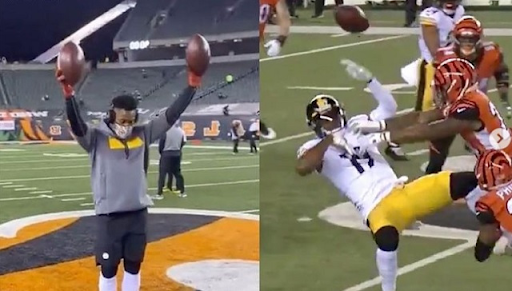 For the Pittsburgh Steelers, the 2020-2021 season started as a dream. The team coasted through their first 10 games and it seemed as if this was going to be their year. When week 11 came around, Covid-19 ravaged the Baltimore Ravens and the game was rescheduled three times. The Steelers, though tired and discouraged, persisted nevertheless, bringing their 10-0 record up to 11-0. The next game, however, was a different story. In week 12, in a game that was initially deemed to be easily winnable, the team fell to the Washington Football Team. This loss began a three game losing streak.

While many blamed these losses on the fact that the team was tired and had been put in a bad situation in week 12, many have also been quick to blame Juju Smith-Schuster, the Steelers’ star wide receiver. In addition to playing professional football, Smith-Schuster has also managed to accumulate 2.8 million followers on the app TikTok, as well as over a million subscribers on Youtube. Starting around week eight, he began making videos before each game that consisted of him running onto the opposing team’s logo and dancing. Smith-Schuster claimed that he was just having fun and joking around, but many fans saw this as disrespectful. Despite the backlash he faced, Juju continued to dance on the logos saying, “I’m not going to stop being myself. I’m going to be the Juju I am.” Each week, Juju continued to dance on the logos, and each week, the Steelers continued to lose. At week 15 though, the Steelers looked poised to win the game against the Bengals. The Bengals at that point had a 3-10-1 record and the thought of a 11-3 team losing to a team with those stats was unfathomable.

Yet again, the Steelers managed to lose. This game proved to be especially embarrassing for Smith-Schuster, as it seemed as if the Bengals made it their goal to tackle him as many times as they could. After this massive upset, fans had had enough. In a press conference the week after, Mike Tomlin, head coach of the Steelers, stated that he would have a talk to Smith-Schuster about sportsmanship and within a few days, the wide-receiver issued a statement saying, “For the betterment of my team and my teammates, I’m going to stop dancing on the logos.” He also mentioned that he had never meant to be disrespectful to anyone and that he was simply trying to reach out to his fans over social media.

With that, the team magically won their next game against the Indianapolis Colts and it seemed as if everything was back to normal. Although Pittsburgh ended up losing their next game against the Cleveland Browns, the Steelers lost only by two points with a team that consisted mostly of backups, as Coach Tomlin had decided to bench many of the starters to rest for the Playoffs. Despite this loss, the Pittsburgh Steelers were still favored to win against the Browns in the Wildcard game of the Playoffs. Things seemed to be going well. That is until Juju opened his mouth again.

In the week leading up to the Wildcard game, when discussing the opponent, Smith-Schuster said, “I think they’re still the same Browns that I play every year… I think they’re nameless gray faces. They have a couple of good players on their team, but at the end of the day, I don’t know. The Browns is the Browns.” This was a major mistake. After making this statement, Cleveland quarterback, Baker Mayfield, posted a video of him playing with the caption, “The Browns is the Browns.” Going into the game, the Browns felt that they had something to prove and this energy was very visible. In the first quarter, Cleveland scored four touchdowns. While it seemed that Pittsburgh had a chance to come back in the second half, they were unable to pull it off, eliminating themselves in the first round of the Playoffs.

As a devout Pittsburgh Steelers fan and an even bigger fan of Juju Smith-Schuster, the end of the season was very disappointing to me. While I don’t think all the blame can be placed solely on Juju, as he is only one player on a roster of 53, I do believe that his actions, as well as those exhibited by others throughout the league show how overconfidence can throw everything off. We can only hope that next season will get better.