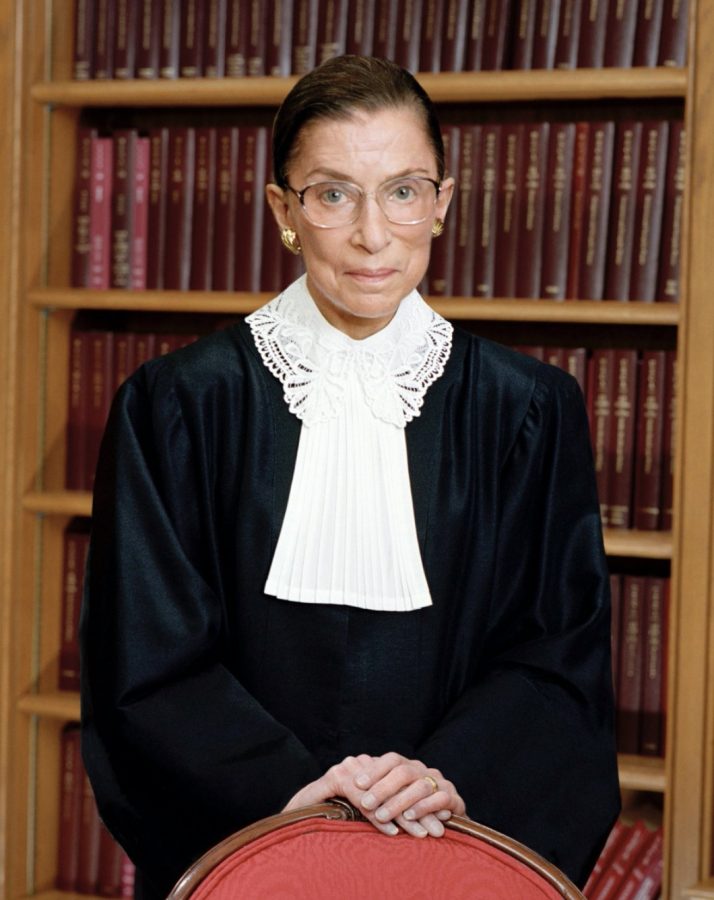 On September 18th, Supreme Court Justice Ruth Bader Ginsburg passed away at the age of 87. Ginsburg battled cancer on and off for the past 20 years, undergoing numerous surgeries and chemotherapy treatments, and most recently she was affected with pancreatic cancer. When the news broke that the Justice had passed away, many across the globe were heartbroken, especially the women who she influenced.

Ginsburg served as a role model to young women everywhere. She graduated from Cornell University with high honors and distinction, and went on to attend Harvard Law School where she was one of only nine women in a class of over 500. While it was already difficult for her to be in such a male-dominated environment, many of her teachers felt that women did not deserve to be there. Ruth proved them wrong. When her husband, Martin Ginsburg, also a student at the school, was diagnosed with cancer, she attended his classes, as well as hers, proving that although she was a woman, she was just as qualified to be there. Later in her academic career, Ginsburg transferred to Columbia Law School, graduating first in her class. Despite her numerous academic achievements, Ginsburg still had a difficult time finding a firm that would accept her. Although it was difficult, she did end up eventually finding a job at the District Court of Southern New York, starting her professional career of excellence. She then went on to become a professor at multiple well known universities, such as Columbia University and Rutgers University.

Throughout her years as a lawyer, Ginsburg fought for women’s rights. She founded law journals specifically devoted to gender discrimination and also created the ACLS’s Women’s Rights Project, giving her a platform to continue this fight. During this period, Ginsburg argued many cases in front of the Supreme Court, advocating for women across the country.

In 1980, Ruth was appointed to the U.S. Court of Appeals for Washington D.C, where she served as a Justice for 13 years. When Supreme Court Justice Byron White retired, President Bill Clinton appointed Ginsburg to fill the position. Once on the court, Ginsburg continued to work hard in her fight for women’s rights, advocating for issues like abortion and equal pay. She was only the second woman to serve on the Court, the first being Sandra Day O’Connor. Her spot on the Supreme Court was well deserved, as she worked tirelessly throughout her career to ensure that justice was served fairly to everyone, regardless of gender.

With an empty spot on the Supreme Court after Ginsburg’s death, less than three months before the election, President Donald Trump has scrambled to find a replacement. This is creating conflict between the Republican and Democratic Parties. With nine Justices on the court, only four of them were considered to be liberal. Now with Justice Ginsburg gone, the number of liberal Justices has shrunk to only three. Traditionally the current President gets to choose a nominee for the position, and President Trump, a member of the Republican party, has nominated fellow Republican Amy Coney Barrett. Many Democrats argue that Trump rushed to fill Justice Ginsburg’s position too quickly. They also argued that choosing Barrett as his nominee will only reverse the work that Ginsburg completed on the Court, as many of Barrett’s values go against the previous Justice’s.

Many are also arguing that Trump is being hypocritical. When the last Supreme Court Justice, Justice Antonin Scalia, passed away under Barack Obama’s presidency, with eight months until the election, the Republicans refused to confirm Obama’s pick, saying that it should be the job of the new president to choose a nominee. Now with a month until the election, Republicans are saying that the current president should have the right to choose the Justice. While Barrett’s confirmation hearings are currently taking place, many Democrats have threatened to “pack the court”, meaning that they will attempt to add more Justices to the court to increase the liberal’s presence. This has sparked a debate across the parties, raising tensions in an already tense election season. Despite controversy over his pick, President Trump believes that Barrett is qualified for the position and that she is the right choice for America.

Although it is important to move on and fill the vacant position left by Ruth Bader Ginsburg, we must remember the legacy that she has left behind. Her achievements have enhanced the quality of life for women around the country and will continue to, regardless of the changes that may be brought by new Justices. May she forever rest in peace.