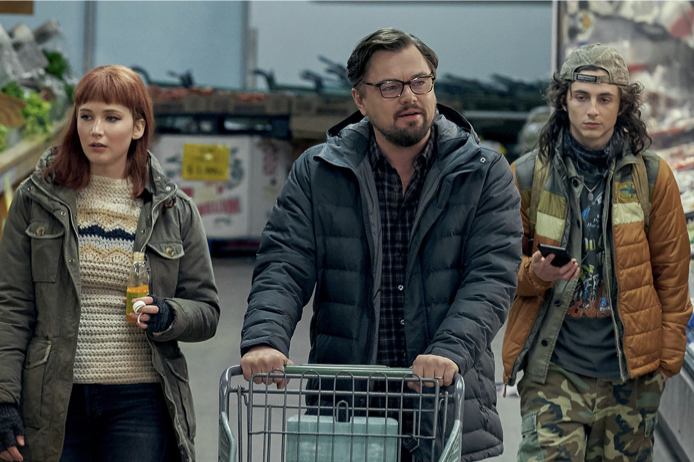 On December 5th, 2021, Adam McKay’s film Don’t Look Up hit Netflix. The film follows astronomy professor Dr. Randall Mindy (Leonardo DiCaprio) and Ph.D. student Kate Dibiasky (Jennifer Lawrence) as they discover a large comet flying straight towards Earth. When they try to share their findings with the President (Meryl Streep) and her aides, they are turned away, so they end up sharing their findings with the media. The response from the general public is lukewarm. Throughout the film, the two must fight against conspiracy theorists and presidential sycophants to prove that there is indeed a comet coming and it will cause a mass extinction event.

I went into this movie with very little knowledge of the plot or background. From the commercials I had seen on television I noticed that there was a long list of A-level celebrities in the film like Leonardo DiCaprio, Jennifer Lawrence, Meryl Streep, and Timothée Chalamet. Instead of an Oscar-level drama, I was surprised to find out throughout the film that it was a pure satirical comedy. The first film that came to mind to explain this one was Tim Burton’s 1996 film Mars Attacks. Similar to Don’t Look Up, Mars Attacks is full of celebrities used to acting in higher quality films with a higher budget and better writing quality.

What Don’t Look Up has, however, that Mars Attacks does not is an extremely realistic story. Mars Attacks’ story is based around aliens invading Earth and humans fighting back. While I’m not saying the story isn’t realistic (because we all know aliens are real), the way it is told is most definitely meant to be a joke. The story of a comet hitting Earth is much more believable but even more believable is the behavior of the public and the government. While Mars Attacks used the aliens for their source of comedy, Don’t Look Up uses characters like President Orlean (who is obviously meant to be a caricature of Trump), Sir Peter Ishwell (a hybrid of Elon Musk, Jeff Bezos, and Steve Jobs), and Riley Bina (every pop star ever). It’s hard not to watch this film and equate every single minor event that happens to something that has occurred in the past five years. It was a little distracting at times, and quite frankly a bit depressing, to laugh at something I think is stupid and then realize that it is some ways real.

What was most impressive about this film to me was the acting quality. When given a script written by McKay who is known for writing comedy for Saturday Night Live and Anchorman, it’s easy to lose a character to the joke. Perhaps the credit should go to McKay for the amount of depth he gave the main characters, but I think the casting made the film. Leonardo DiCaprio and Jennifer Lawrence were excellent in their roles.

Was this movie one of the greatest films I have ever seen? No. But, it was funny and emotional at times. I would recommend watching it once because the message is worth it.