“The Wheel of Time” Review 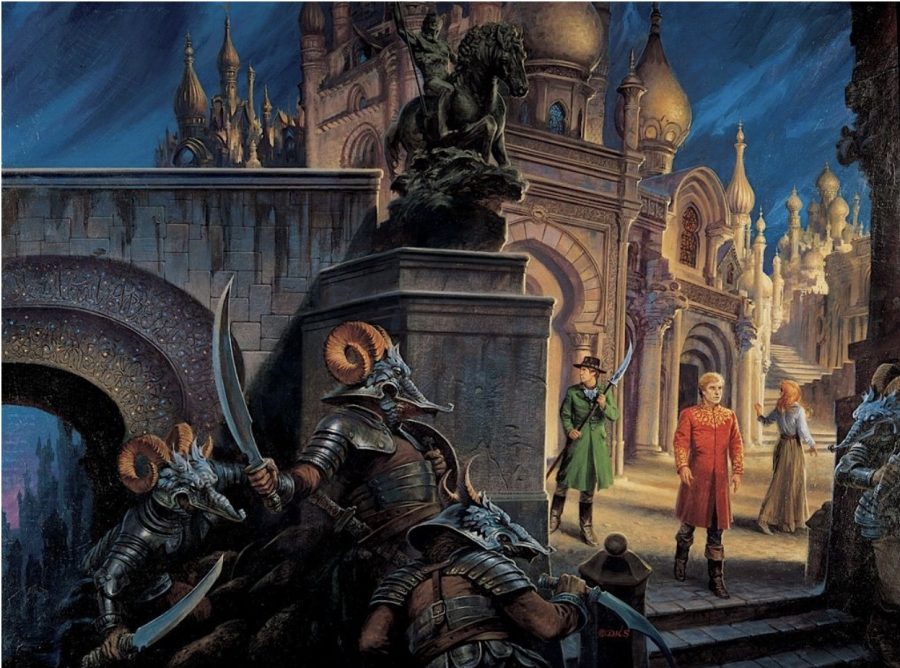 Outside of the fantasy community, there are a few very well known series: Lord of the Rings for its scope and the precedents it set for the genre; Harry Potter for its appeal to young/more amateur readers; and A Song of Ice and Fire for the absolute dumpster fire that was the Game of Thrones TV show. However, within the fantasy community, there are few series as lauded as The Wheel of Time. With author Patrick Rothfuss (who wrote another famous series, The Kingkiller Chronicle), describing it as a monolith in the genre, and quoted as one of the largest reasons Brandon Sanderson (yet another famous author) got into writing in the first place, it’s no wonder it’s sold over 80 million copies. Anyone who tells you the series isn’t the greatest thing since the Bible either hasn’t read it, or should kindly be escorted back to the nursing home because their dementia is clearly getting worse. Of course, everything I say is subjective… hough I don’t like to think of it that way.

The Wheel of Time is a series of fantasy novels written by Robert Jordan and completed by Brandon Sanderson spanning 14 novels (15 if you include the prequel novella). 14 books may seem like a daunting task, though it is more than worth it in the end. Some people say that the series can feel a little slow at some points due to Jordan’s writing style, and describe them as tiresome when discussing some of the later books. For me, this argument doesn’t hold up as all the books have been released, and you don’t have to wait two years in between each novel, only to have almost nothing happen in the main plot. It’s an incredibly well paced series all things considered. For the negatives, I have very few issues with the series, and the ones that I do have are mostly just nitpicks and nothing worth mentioning.

The series starts with a book called The Eye of the World. It is often criticized as a Lord of the Rings rip off, though is described by Jordan in interviews as  Lord of the Rings as he would’ve written it, and you can be assured, the books become very unique. While the first book is great and sets the stage for the rest of the series to come, the second book is even better. Starting from the very beginning of the prologue, the book already begins to build up to its conclusion. Throughout the book, everyone is talking about it, with all the characters converging on one place. Once they get there, the only word to describe it is epic. This is a trope used a couple more times in the series and it’s nothing short of amazing every time it’s used. The third book is again great, and really is the finishing up of the first “trilogy” of the series.

This brings us into book four, where everything changes. This is where the series transforms  from a great fantasy series to the most incredible work of fiction ever produced. The Shadow Rising is one of, if not the best book of all time. This is where the series really comes into its own: new cultures are introduced, twists in the plot happen left and right, and we really see the entire cast of characters open up. While the story of the first three books is mostly self contained, this is far different. Jordan begins to open plot point after plot point, until it reaches the point where it is no longer your typical fantasy, but a vast sprawling world that really makes reading the fourteen books justifiable. Many of the characters that you have become familiar with become more nuanced and many have their personalities truly fleshed out in this book. The staggering amount of new cultures, well written characters, and development on the magic system really make this book and this series what it is. While the first three books are a typical quest style adventure (which isn’t really an issue and is done much better than most other books), the series becomes something much more after book four. This sense of a massive world, with politics, history, and its own issues continues on into all the other books in the series. Although books seven through ten are the least eventful of the series (and some might even say boring), yet I think that judgement is unfair as they set up so many plot points that are important later on, and help to flesh out other characters and cultures. Again, the books are all out already, so it isn’t that bad. If you stick through it, you’ll find book eleven is absolutely incredible, as not only one of Jordan’s best works, as it’s a sort of return of form for him, but also as one of the best works in all of fantasy. Unfortunately, after writing this book Jordan tragically died.

Before I move on to the Sanderson books, I do want to mention some of the other things that make this series great. One of the best aspects of the series is the fact that Robert Jordan wrote an entire system of swear words in the series, which really does give the world that much more of a charming touch to it. You also have the magic system, which is beautiful, well thought out, and interacts with the world in a way that is truly interesting, lending itself perfectly  to the series’ exceptional storytelling. Now for the final, and arguably best aspect of the series as a whole: the cultures. Though Jordan’s writing can be a bit wordy for some, it is undeniable that it creates a vision of the world that is clear, and in depth. With many of the worlds that are showcased in other series, the more you dig into them, the more you realize that it is all really a facade, and that they really aren’t as deep or sophisticated as you originally thought. However, with the Wheel of Time, it is pretty much the exact opposite, the deeper you go, the more you realize how intricately crafted and thought out the whole world is. The different cultures have entire histories to them, unique fashions, each with their own motivations and ways of going about different issues. The books even describe the different ways that they fight, with weapons unique to certain cultures, and histories behind those weapons as well. It’s really just mind boggling the amount of detail put into every nation.

One of the most tragic things for the WoT and fantasy community in general was the announcement of Jordan’s death. On September 17th 2007, it was announced on his blog that Jordan had died at only 58 from a rare and fatal blood disease after finishing only eleven of the twelve books. Some hope was given for fans of the novels as his wife and publisher had worked with him the weeks before his death getting down almost everything about the final book on notes so that it may be finished by another author. After his death, his wife and publisher worked to find an author to finish the series. During their search, they found Brandon Sanderson (the greatest fantasy author of the last decade in my not so humble opinion) through his eulogy for Jordan, who was ultimately chosen to finish the series.

Now, on to the Sanderson books. To say that the way he finished the series is incredible would be quite the understatement. Memory of light was split into three books and these are some of the best in the series, and universally appraised, even by those who didn’t like the Wheel of Time books after book four. Sanderson was able to cover all of the plot points, tying off every character’s story, leaving the reader with a truly satisfying conclusion.  Despite the final chapter having been written by Jordan prior to his death, Sanderson’s leadup to it was fantastic. There really isn’t much to say about it without spoiling major parts of it, but I strongly recommend that you read it— it’s very very good.

If you are looking for a long fantasy series with intriguing characters and terrifying villains, you should definitely consider reading the Wheel of Time series. I will leave you with a couple of tips if you want to get started reading The Wheel of Time. First of all, the audiobooks by Micheal Kramer and Kate Reading are amazing, and some of the best audiobooks available, so if you are interested in the premise but don’t enjoy reading, or also just want to have something to listen to while doing something else, this is not a bad option. If you are planning to read the prequel, A New Spring, I would recommend reading it after book ten, or book six at the very earliest if you don’t want to wait as long. Provided below are links for purchasing the book, and a free excerpt of the beginning of the book if you aren’t sure you want to buy it. I really can’t praise this series enough, it truly is incredible, cementing both Robert Jordan and Brandon Sanderson as the kings of epic fantasy.

Eye of the World on Amazon:

Eye of the World excerpts: