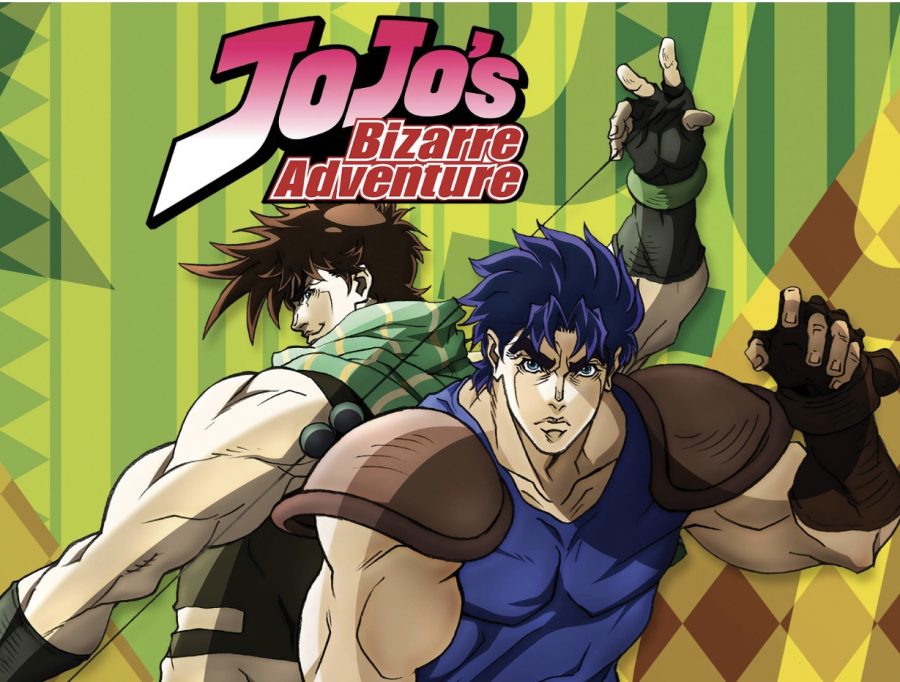 JoJo’s Bizarre Adventure is an animated tv show made by David Studios, based off of the Manga written by Hirohiko Araki, a Japanese manga artist. A fun thing about the series is that you can see Araki grow in his writing and artistic abilities. Each part of the show is almost a series in its own right, making it virtually impossible to review all of the seasons in one article. So without further ado, this first review will contain parts one and two of the JoJo series as they are by far the two shortest and were combined into one season in the anime.

JoJo’s Bizarre Adventure is a whimsical and fun series with one glaring issue:its treatment of women. The treatment of women throughout the series ranges from decent to abysmal. This does get better as the series progresses, though by the end it still isn’t where it should be. In the first season and in part the second season, women are treated as objects or prizes to be obtained by “the hero” after his great battle. Of course this all has to do with how old and outdated the manga is, but it still really annoys me when watching it. The first season has two female characters, one who serves as a plot point for her younger brother to rescue, and the other is a girl the main character is trying to win over. The second season is slightly better, with there at least being one female character serving as the coach to the two main characters, though even sometimes she is used as a sexual object, and is mentioned many times as not being able to do things because she is a woman. There is also again another girl used as a prize for one of the characters, and another used as a lure by a villain to get the main character not to attack him. In future articles about JoJo’s Bizarre Adventure, I will talk about how future seasons handle this issue. . As for other shortcomings, the artstyle of the first season is a bit generic, but overall isn’t too irritating, and though the story follows many tropes, it does them pretty well.

JoJo’s Bizarre Adventure is a story of impossibly beautiful men fighting each other over the fate of the world, while stopping time to narrate what they’re going to do next or what’s on their mind. It definitely stays true to its name in all rights—scenes are flashy, ridiculous, and fun, with characters striking poses and dropping one liners more times than I can count. The first two seasons rely on a magic system known as Hamon, which is based on how the user in breathing, and powers the sun, which is perfect being as the enemies they face the most in the first two seasons are vampires, and a race of ancient god looking people who are damaged by the sun. The first part’s relatively simple plot revolves around an Englishman’s pursuit to kill a vampire, but JoJo’s Bizarre Adventure manages to make it interesting. This is mostly due to the incredibly written dialogue and characters. Though the main character is pretty boring, the people around him are really what make the first season interesting:from the honorable rogue who narrates every scene in the middle of a battle, to the sociopathic antagonist, to the Italian Hamon coach and his checkered hat. The first season, while overall not as memorable as the other seasons, it is still fantastic, and has many beats that are fun and iconic. The second part takes place many years later in 20th century England, with the stale character of the previous JoJo replaced with the charismatic, witty, and a stark contrast to the previous JoJo. This was a concept Araki used for every JoJo part after this, which at first may seem a bit annoying, but it really makes sense, and is done very well. This story takes a much more interesting plot, detailing the main character’s pursuit to kill some people from a race known as the pillar men, which resemble gods from Latin, Roman, and Asian mythologies. They aren’t as strong character wise as the villain of the first part, though their powers and fights are definitely more interesting. The cast of characters is also very well done as always. You have the complete contrast to JoJo in the form of a co-protagonist, who eventually become like brothers to each other, and then you have some older versions of characters from the first season, and somehow the show makes you fall in love with a Nazi general of all things. The Hamon system is greatly expanded in this part as well, and is really the only possible example you could give for why it might even compare to the stand system introduced in Part Three. Overall, the second part is one of my favorites with all of its hilarious moments and the rivalry/bromance of the two protagonists.

Another thing that can’t be left out with JoJo’s Bizarre Adventure is the music. The show has many memorable tracks of its own, and heavily references classic rock in the names of many of the characters. The openings of each episode have fantastic music along with the imagery, and are great even after the average 20 times you see one of them, though in this season it’s only 9 and 18 for each intro.

JoJo’s Bizarre Adventure Parts One and Two, while flawed, are some of the best fun I’ve had watching tv, and I strongly recommend you watch them. If you plan to read my next review, I would recommend watching seasons one and two, as I will not be as vague about some of the things in the first two parts in my review of the 3rd part, and you certainly don’t want to be spoiled.