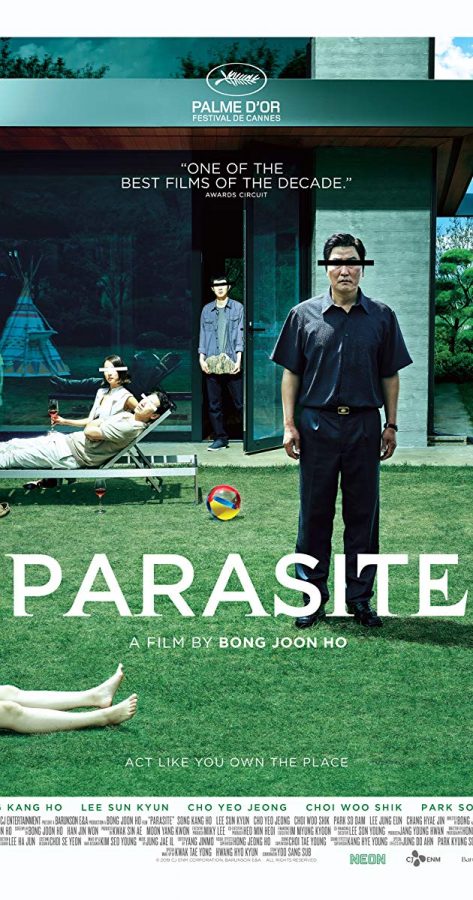 Imagine a light-hearted comedy that pokes fun at the differences between the rich and the poor, the conniving and the gullible, and the self-absorbed and the loyal. Now, imagine a suspenseful thriller with secret rooms, meat skewers, and **spoiler alert** lots of blood. Combine both genres into a two-hour rollercoaster of a film and you have The Parasite. The Parasite world premiered in May of 2019 and less than a week after its opening, was awarded the highest prize at the Cannes Film Festival: The Palme d’Or. This made Bong Joon-Ho, the director and writer, the first-ever Korean recipient. The film recently premiered in the United States, grossing $14.5 million in only five weeks. Worldwide, however, the film has generated over $118 million in USD.

The film opens in a semi-basement apartment where we meet the Kims, a lower-class family, doing whatever they can to make ends meet. When Ki-Woo, the son of the family, comes across an opportunity to work for the rich Park family as an English tutor, he quickly jumps at it. He gets his sister, Ki-Jung, to forge legal documents and a diploma, even though he is not a college graduate, in order for him to look more qualified for the position. Once hired, he begins tutoring the Park’s 15-year-old daughter, as an inappropriate relationship begins to grow between the two. While this is going on, Ki-Woo begins to find ways to get the other house employees fired and his family members hired into those positions. Lying about his relationship with them, Ki-Woo slowly gets his sister hired as an art teacher, his father as a chauffeur and his mother as a housemaid. The entire time, the Parks are unaware that Ki-Woo is behind this whole scheme and that all of their new employees are related. Even though the Kims think highly of the Parks, they quickly discover that the feeling is not mutual. When the Kims are not there, the Parks speak badly of Mr. Kim, saying he has a “special smell” (not a good one), since he rides the subway. When the Parks go away for a camping trip, the Kims find out that they were not the only ones leeching off of the Parks. Below the Park’s large home, the Kims discover a bunker where they discover Geun-Se, the husband of the ex-housemaid, has been living for the past four years. The Kims threaten to turn Geun-Se and his wife in, locking him back downstairs. During the last major scene of the movie, the Parks have a birthday party for their youngest son, during which Geun-Se escapes the basement bunker, murders Ki-Jung, and severely injures Ki-Woo. Neither Mr. or Mrs. Park show much concern for the Kims while they are being stabbed by Geun-Se, so as a final display of his anger with the Parks, Mr. Kim murders Mr. Park, quickly hiding in the bunker, where he ultimately hides for the rest of his life.

I went into the theatre knowing nothing other than the fact that the film was subtitled in English with Korean audio, and that it was a big hit worldwide. The initial storyline seemed relatively calm and funny, with jokes scattered throughout. Ki-Woo’s attempts to bring his family into the Park home garnered laughs throughout the audience. The light tone continued until about halfway through when things took a dark turn. All of the laughs that could be heard before slowly turned into gasps. It seemed as if two completely different movies had been put together. The jokes were replaced with gore and violence, causing me to frequently shield my eyes from the intensely graphic scenes. The entire time the only thing I could think was, “What the heck just happened?” Yet, the movie still carried on just as well as it did before, keeping me wanting to watch more. Once the screen turned black and the credits began to roll, I found myself again trying to make sense of everything that had just happened. Everything has been relatively peaceful until Deun-Se was introduced. The point that pushed me over was the birthday party scene, where two people were murdered and another critically injured, in front of a crowd of families and young children. Despite the nervous feeling that this film gave me towards the end and the overly-graphic gore, everything tied together so well that my amazement outweighed the fear. Even now, weeks after having viewed this film, I am often still thinking about Bong Joon-Ho and his artful mixing of the comical and the savage. A movie that still has its viewers thinking about it weeks after they have seen it, in my opinion, is a movie that is well done.

My advice to viewers: Don’t be intimidated by the subtitles. Excellent movies like this are often skipped over because the viewers don’t want to go through the trouble of reading. Believe me, the trouble is worth it. Also, do your research first. If you are going to the movies to watch a happy-go-lucky comedy with a satisfying ending, this might not be the right movie for you. The same goes if you are expecting a super graphic horror film. The Parasite falls somewhere in the middle of the two categories, bringing in a psychological thriller theme as well. It is a marriage of opposites, but Bong Joon-Ho is able to pull it off, making it all work and he does so brilliantly.