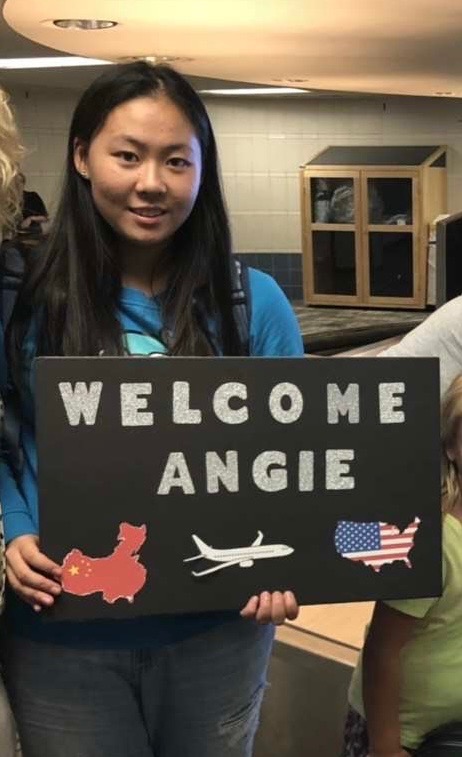 “So after I graduated from Middle School in China, I decided to study abroad. I joined the exchange organization called Forte, so I became an exchange student in Minnesota during my freshman year. A lot of people wondered how I found the school in the state with nothing except the Mall of America.

At that time, I worked with Forte International Exchange Association. I think they have student exchange programs all over the world. Before I came to the United States, I thought there were only two situations in which I would need to change my host family. The first is that the host family is unable to continue hosting the exchange student because of family issues. The second is that the student doesn’t feel comfortable with the host family. So when I arrived with my first host family in San Antonio, Texas, I thought I would never change my host family. They were really looking forward to getting to know me and taking me to different places and building a relationship with me as soon as possible. It turned out I was wrong. On the eighth day of my arrival, I was having dinner with my host family as usual and then five minutes later, a local agent brought a police man with a gun and two translators. She told me that I had to move out as soon as possible and she did not allow me to talk to anyone in the family. Everyone in the house was really shocked because nobody had seen this coming. I argued with the agent because I didn’t want to leave and I felt like I was already a part of the family. I didn’t know what was going to happen if I moved out because nobody had told me anything about where I was going for school or which city I was going to. They didn’t tell me anything. But it was my only choice. I was really terrified because everything was unknown and on the way out, one of the translators told me that they had already found me a new host family that I would really like. When I asked them why I had to change my host family, all of them told me that it was for my safety.”

– Did you talk to your parents about this while it was happening?

– You just packed up and moved to Minnesota from there?

“There is another part of this story. After moving out, my director drove me to my second host family the following night, however, some unexpected things happened again. I thought this time everything was going to be better, but apparently I was wrong again. At that host family, there was nobody around at night except the German Shepherd that would stare at me all the time. It turns out that they worked at night, but nobody told me anything. How was I supposed to know? It was scary. I called my director and she told me that she didn’t live with them before, so how would she have known what was going on in their house. The next morning, another agent picked me up. She told me that I would stay with her until I found another host family. This time, I ended my experience with the second host family within 12 hours. I was really afraid to open my suitcase because I didn’t know when I was going to move out again.”

– After you left the second host family, you went to Minnesota?

“Yes. There was something going on with Minnesota too. Within that week I didn’t talk to anyone because I was trying to protect myself in Texas. I didn’t trust anyone from the agency anymore so I didn’t want to communicate with them. After a week with the agent in Texas, I decided to fly to Minnesota because they found me another family in Minnesota. In that host family, the host dad had five kids and then he got divorced. He had a girlfriend and she didn’t have any kids, so she wanted to control everything in the house. Apparently that didn’t work because the kids didn’t listen to her and they had a lot of family issues. I figured that it wasn’t a great place for me to be. I didn’t trust anyone from the agency to find me a new place to live so I just asked the school if anyone wanted to host me because I really liked the school and I didn’t want to leave. Someone wanted to host me and I lived with them for the next ten months. They were nice. I learned that an exchange year is not like in the movies and there is a lot of uncertainty.”