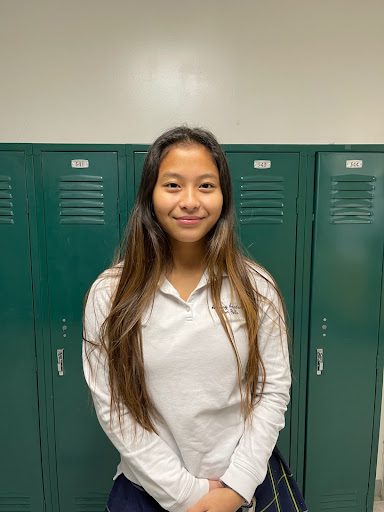 “I was 7 years old. I used to live in a refugee camp on the border of Thailand and Burma. Burma is now called Myanmar, but I still call it Burma. In the refugee camps, I went to pre-k and kindergarten. We started at a later year than schools in America, so I was about to enter first grade after finishing kindergarten, but then I had to come to America because my parents applied for a green card visa through UNHCR. I forgot what it means.

Basically, I had to come here, to America, so I didn’t get to go to first grade. When I got here, I didn’t know any English. I didn’t even know how to use the toilet, to be honest, or the stove. We didn’t know anything. But, I did know how to say ‘bathroom’, ‘yes,’ and ‘no.’ So, for the first day of school I was really scared. I was like ‘I don’t want to go. I don’t want to go to this school.’ So I walked into the school and it was my mom, my uncle, who could speak a little bit of English so he was translating for us, me, and my brother. My brother had Karen kids in his class already, so he got situated with them, and I was entering second grade instead of first grade, so basically I skipped first grade, but I didn’t. It was just different.

So I came into my second grade classroom. My teacher was Ms. Fowler. She had the biggest smile ever and said ‘hello.’ She talked to me really nicely and I was thinking, ‘who is this white lady?’ When I looked around my classroom, that was the first time I saw so many different people. There were a lot of Black kids. There were a lot of Hispanics. There were three other Asians, but there were not many. There was a whole variety and it was the first time I had ever seen so much diversity. Growing up in the refugee camp, you’re sheltered. You only see other Karen people. Basically, I was really scared. When everyone introduced me, Ms. Fowler introduced me, my mom and uncle had to leave. But, I was not ready for them to leave. I was so scared. I started bawling my eyes out because they were leaving. I held onto my uncle’s leg. I wrapped my whole body around it and he couldn’t walk. He was wobbling and I was crying so much. I was making a whole scene. Ms. Fowler was thinking, ‘oh my god, I must have scared her or something.’ Everybody was staring at me and I was just thinking, ‘ugh, I don’t want to be here. I don’t know these people. What am I going to do. How am I supposed to understand them?’ So I was so scared that I cried in front of my whole class and it was so embarrassing looking back. This happened for ten minutes and I wouldn’t let go of my uncle’s leg. My mom was yelling at me saying, ‘what are you doing? Why are you being this difficult. It’s just school.’ She’s yelling at me in Karen and I was just saying, ‘No. I don’t want to go to school.’ So, guess what. I didn’t go to school that day. They brought me back home and I chilled at home and I was fine. When I came home that day from not going to school, my dad came and he was so mad at me. My parents both lectured me and then I said, ‘Okay, let me just try again tomorrow.’ And I did. I ended up liking it. I love my teacher. She’s a big part of my life now. That was embarrassing and I cried in front of everyone.”